6 years ago, I made a lap quilt for my mother in law. I wasn’t very experienced with quilting, so it wasn’t awesome – but she’s kindly had it out on her couch ever since. 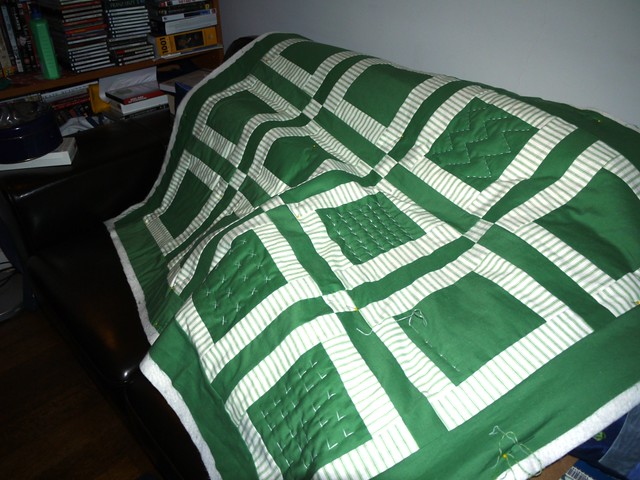 She has recently moved into a new house that she had built. It’s very different from the old house: modern, bright, and everything is white, red, and black. She obviously needs a new lap quilt. She’s been thinking about building this house for years, and I made a start on a new lap quilt for her in October 2014. 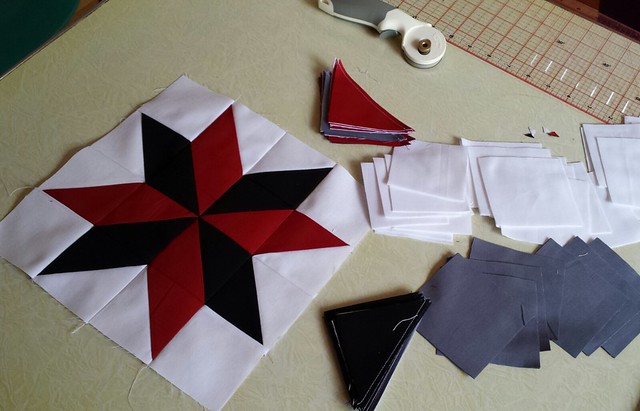 At one point I didn’t think she’d ever get the house built, so I put the project aside so it wouldn’t mock her! But now it is all built and looks fantastic.

Originally I was going to put some lovely Japanese fabric with the star blocks – fabulous fabric with greys, blacks, reds,and white. I proudly showed her the fabric, and she told me she doesn’t like Japanese fabric. I’m glad she told me as I LOVE it, so it would be terrible to waste it on her. However it’s meant I’ve been making these blocks and not really known what I’d do with them. With the Japanese fabric I was going to alternate the square blocks with squares of the Japanese fabric. I decided I’d add white around so the stars would be ‘floating’ rather than the points touching the neighbouring blocks. Now I had to rethink things and find other fabrics to go with the blocks. The grey in the blocks is almost a purple-y grey, so I was having trouble matching it to greys or even blacks with greys, but I found a few possibilities. None I was thrilled with, but possibilities. I kept making star blocks. 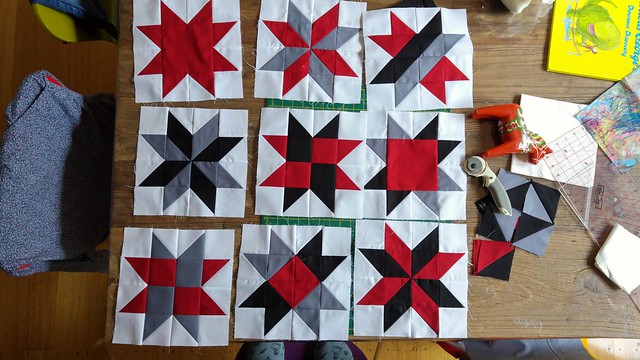 Last week I took some of the blocks to Frangipani Fabrics, and Briony and Cath made some suggestions. I kinda thought my MIL would like some sort of floral or leaves, but not too fussy. Nothing really fit that, but they showed me some aboriginal fabrics that I loved. I didn’t know how my MIL would react to them. But the more I looked at the ‘Plum Seeds by Kathleen Pitiara’ fabric, the more I could imagine it in this quilt. I could sort of fussy-cut it and frame the blocks – and I found some red fabric with faint circles that would look nice the in the ‘corners’ of the frames (I bought fat quarters of this, so don’t know the fabric’s name). This is the general idea: 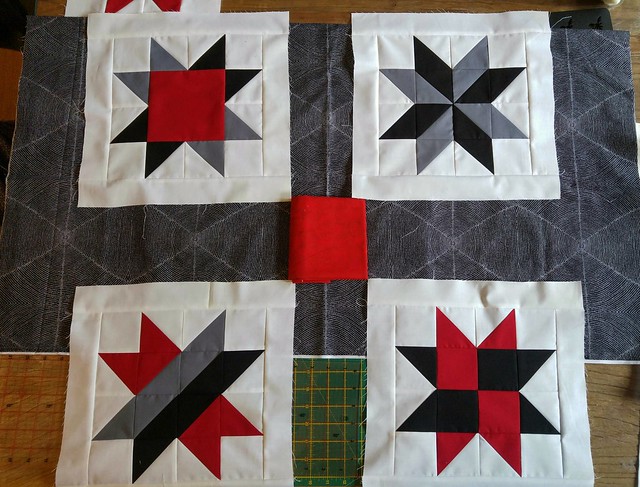 And for the back, Briony suggested this, and I think it will be just the thing. 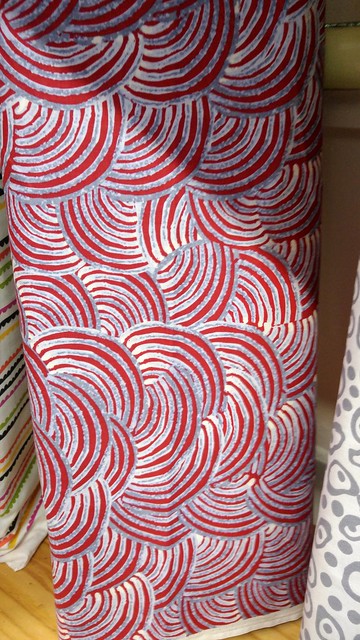 It was with great trepidation that I took the fabrics and some of the blocks with me for my first visit to my MIL’s new house, but the exciting thing was that SHE LOVED THEM!! So this afternoon I made a bit of progress (the last couple photos above). The light was fading, so I’ve started cutting the Plum Seeds fabric but haven’t yet started piecing. I’m still not sure if the quilt will be 3 x 3 or 4 x 4, but I’ll do some of the framing and see what I think. It’s not an exact science!

So, that’s the newest fabric in my stash – although it won’t last long!

Some notes for myself:

This entry was posted in Quilting, Sunday Stash. Bookmark the permalink.